Merry Holidays and Happy Solstice from Grind Pulp Podcast. Listen in as we dig into two stories and our feature film discussion, Riki-Oh: The Story of Riki. There’s a new Grind Pulp Podcaster. The voice of the one and only Manga Matt can be heard for the first time on this episode. Matt digs so deep into The Story of Riki that we were almost pulled into a whirlwind of kung fu flutter kicks. Jeronimo and Andrew checked out the Back Alley Film Series screening of The Visitor (1979), Jeronimo checked out some Just Cause Universe stuff by Ian Thomas Healy, Manga Matt’s been reading some Love and Rockets comics as well as the Attack on Titan manga.

The short stories we cover in the episode:

Riki-Oh: The Story of Riki

Grab some popcorn and Grape Soda the next time you’re out at the store. We recommend popping in one of those movie style poppers. Also, have wet and dry paper towels nearby so you don’t get butter all over your e-reader or remote control. See you next time! 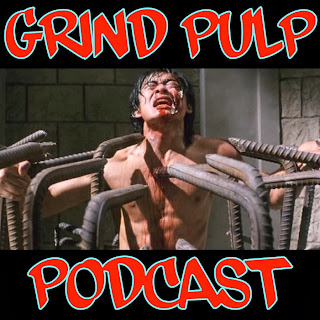 Posted by ANDREW CREVIER at 8:09 AM