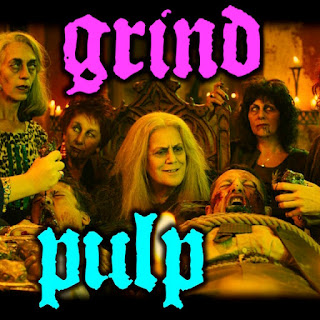 Long mentioned and promised, the Grind Pulp Podcast of Witching and Bitching is finally here. This is the first official Grind Pulp Podcast to be published after some hexing and devilry at the Devil’s Gate Mall. The team gets closer and closer to the Game Over screen despite an entire Planet Terror episode being lost in a vortex of unspooled magnetic cassette tape film flying from an explosive ghetto blaster like eldritch party streamers from hades.

Posted by ANDREW CREVIER at 2:28 PM