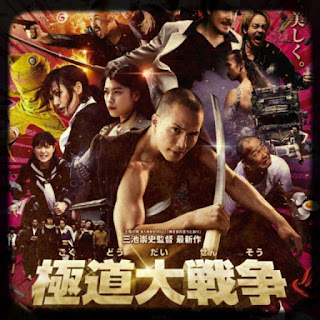 From the Midnight Theater at The Devil's Gate Mall, join Andrew Crevier, Jeronimo Brown, and Manga Matty Ice as they drink everything and discuss Takashi Miike's insane 2015 film, YAKUZA APOCALYPSE.

Posted by ANDREW CREVIER at 7:54 PM No comments: 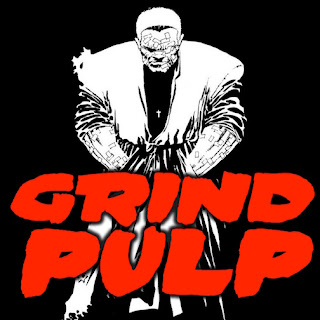 In this episode the team diverge from routine and instead discuss the three remaining volumes in the Sin City library not adapted into film. MangaMatt gives his all as he pontificates on author, Frank Miller, and the trends and style choices in his works. Jeronimo and Andrew find it hard to recall specific short stories, as many meld into the overall world of crime-ridden, Basin City. All leads bring them to the final showdown of "Hell and Back,” the last and most radical Sin City story in the pantheon. Guzzle booze, squeeze a broad, and bite the bullet in this all-inclusive Grind Pulp Podcast exploration of a legendary run by a writing great.

*All works by Frank Miller

Posted by ANDREW CREVIER at 9:56 AM No comments: 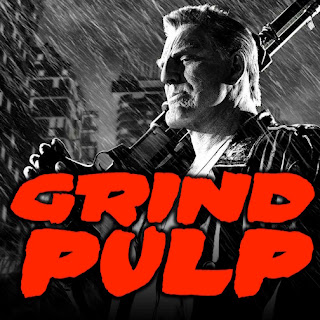 This episode features MangaMatt's movie selection, Sin City, along with its younger sibling, Sin City: A Dame to Kill For. Lines are drawn in the sand over which story was the best in these hyper-gritty and ultra-noir crime stories with a twist of weird. How do these movies compare to their comic panel progenitors? Is the sequel worth seeing? Will MangaMatt ever be allowed to run the movie projector at the Devil's Gate Mall again?
Answers to these questions can be found in an episode worth killing for, worth dying for, and worth going to hell for. Amen.

Posted by ANDREW CREVIER at 9:18 AM No comments: 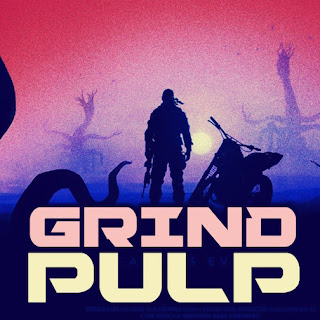 Subscribe on itunes, stitcher, or your favorite podcast app. Always free, always for the love.

Returning from 20000 fathoms come the grind pulp fiction picks for the Monsters: Dark Continent companion episode. MangaMatt presents a story featuring Godzilla and one man’s fifty year history fighting the king of monsters. Andrew pulls us into another dimension of parallel universes, nightmares, and plague dogs in Juggernaut. Jay closes us out with Peace with Honor, a story pick from the Monster Earth, in which the atomic age has bred us a entirely different kind of WMD, Kaiju with the ability to level cities. Listen in to this episode for black hole cannons, giant Vietnamese bats, and terrors from beyond our dimension.
Feature Fiction Picks:
Godzilla: The Half Century War - by James Stokoe
Juggernaut - by C.J. Henderson, from the anthology Stomping Grounds
Peace With Honor - by Fraser Sherman, from the anthology and world of Monster Earth

Posted by ANDREW CREVIER at 9:50 AM No comments: